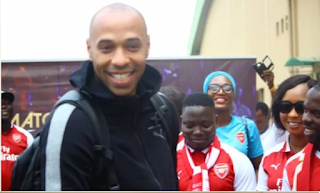 Arsenal FC legend, Thierry Henry landed in Lagos, Yesterday December 17 on Sunday for the Guinness Made of Black programme and he was received by a massive crowd of personal and Arsenal fans. Most of them on Arsenal Jersey excited to see the hero. It was a great site to see the taking pictures and exchanging love
The 40-year-old Frenchman is presently in the country to meet winners of the ‘Be a Front Row Fan’ consumer promotion of the company.
The international football icon will equally join the winners to watch the West Brom v Manchester United EPL game at Landmark Event Centre, Victoria Island, Lagos.
The Arsenal legend was received by a large crowd at Murtala Mohammed Airport, Lagos upon arrival yesterday. 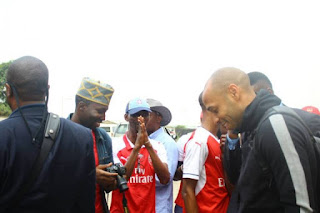 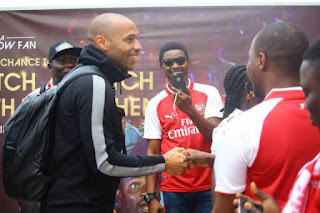