MY PRIORITY IS FOR PDP TO RETURN TO POWER 2019–JONATHAN 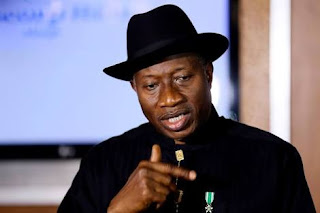 Former president of Nigeria Goodluck Ebele Jonathan has said  His priority is to make sure the People's Democratic party returns to the presidency in 2019.He said his focus now is to take the PDP to its former position.
The former Nigerian leaders said this when he received Bode George, a chairmanship aspirant of the PDP, at his residence in Otuoke, Bayelsa state.
“Whether I like it or not, I must take responsibility for the defeat because I led the party to the election,” the media team of George quoted Jonathan as saying.
“My priority now is how to ensure that the Peoples Democratic Party regains the presidency in 2019.… The only thing that will make me sleep well is to ensure that the PDP comes back to power.”
The former president said he was working with other stakeholders to ensure that the party was well organised to take back power. Promising that the mistakes of the past would not be repeated, Jonathan advised the party to take steps to regain the confidence of the people
Earlier, George had congratulated the former president on his 60th birthday.
George urged the ex-President to ensure that the PDP emerge stronger from the forthcoming December 9th national convention .